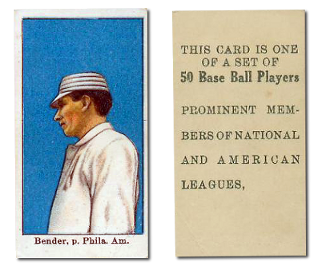 The 1909 E101 Baseball Card Set is also known as the Anonymous "Set of 50" cards.  The E101 cards are 1½" by 2¾" in size and unnumbered.  The artwork on E101 cards is very similar to both the E92 Dockman & Sons set, and the E105 Mello Mint sets, making it likely that they were all produced by the same company, but what product they were distributed with remains a mystery.