Looking for Complete Football Sets from 1950 and older? Click Here

Find cards and sets from your favorite NFL team 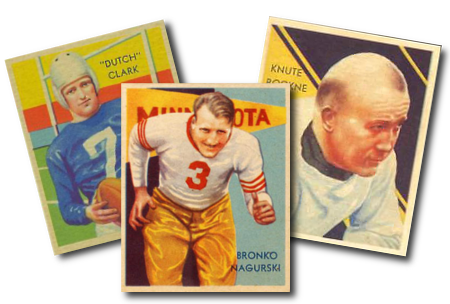 The 1935 National Chicle was the first football card set to feature NFL players, and included six future Hall of Famers.   The 1935 National Chicle Football Card Set features a card of the legendary Notre Dame football coach, #9 Knute Rockne, who is the only subject in the set who was not a NFL player.  The #34 Bronko Nagurski card is similarly scarce in population to the famous T206 Honus Wagner card.

CLICK HERE if you want to sell your 1935 National Chicle Football Cards.