Sports cards from the Pre-War Era are often the most famous outside the collecting world, as they hold the most value on a per card basis.   Their age, rarity, and the reverence for the legends depicted on these cards sometimes result in record-breaking auction sales which make national headlines.  Baseball cards like the famous T206 Honus Wagner (1909-1911), one of which broke the record by selling for over $3 million, capture the imagination of people everywhere who dream of stumbling across these valuable pieces of American history in their great-grandpa's attic.

For detailed information on several early Pre-War sets, check out Dean's book Before There Was Bubble Gum: Our Favorite Pre-World War I Baseball Cards.

A Brief History: The Beginning of Baseball Cards

The earliest collectible picture cards can be traced to the 1860s, as new technology made the wide-spread distribution of printed advertisements affordable.  Companies started printing cardboard fliers which featured comics or images of presidents on one side and messages promoting the company on the other.  By the late 1880s, the popular practice of pasting these 'trade cards' into scrapbooks inspired tobacco companies to include similar cards depicting athletes inside packages of their products, many of which featured baseball players due to the sport's rising popularity.   Prominent tobacco cards from these years include a variety of sets from Old Judge, Allen & Ginter, and Kimball.

Reprints of many of these iconic sets are available as a more affordbale way to enjoy early baseball cards, including the 1912 T207 Brown Back reprint baseball card set created by Dean's Cards.

World War I initiated a halt to baseball card production which lasted for the most part until the emergence of a new kind of collectible in the early 1930s: bubble gum cards!   These baseball cards included inside packs of gum were the first to resemble modern baseball cards, as they were larger than tobacco cards, featured information about the players on the back rather than advertisements, and had card numbers.   Popular bubble gum card sets from this era were produced by Goudey, DeLong, and Sports Kings, with the 1933 Goudey Baseball (R319) renowned for its four different Babe Ruth cards.  In 1939, Playball produced its first of three consecutive sets which featured real black and white photos rather than colored paintings, the first example of a practice which would become commonplace by the 1950s.  After the 1941 Playball set, WWII brought about another baseball card hiatus, effectively ending the Pre-War Era.  The large scale production of baseball cards would not resume until the beginning of the Vintage Era in 1948, when baseball cards would boom with the efforts of Topps and Bowman.

Check out our page on selling baseball cards from the Vintage Era.

While pre-war baseball cards are the most valuable on a per card basis, they are also the trickiest to buy, collect, or sell.  These cards were produced sporadically and often printed in small numbers.   Many of the players depicted on these cards only ended up having one or two different cards featuring their likeliness, making these examples even more valuable.  However, since these early baseball cards are close to or even over 100 years old the surviving examples are not in top shape which definitely affects their value.  Dean's Cards will usually buy pre-war cards in ANY condition due to their rarity, but condition will affect how much we are able to pay.

To read more about condition, check out our page on how to grade sports cards.

Unlike most of the sports cards printed from the 1950s to the present day, determining what years these cards were issued by simply examining them is difficult.  Many of the indicators typically used to determine print year, such as statistics and copyrights on the back of a card, are usually not present with pre-war cards.   (To learn more about identifying baseball cards, check out the designated section on our informative How to Sell Your Baseball Cards page if you have not already.)   Many of these sets were even created without card numbers, and several variations of the same card being produced was not uncommon.

Another confusing problem is that most of the pre-war sets have been reissued in the form of reprint (or archives) sets.  These sets were usually printed sometime between the 1990s and present-day.  These cards are made to look exactly like the originals and allow collectors to enjoy classic baseball cards at an affordable price, yet they present opportunities for misunderstandings or deception.

Please be careful when buying pre-war baseball cards at flea markets.   It is common practice for these sellers to rough up reprint cards and sell them.  Unfortunately, sellers will send us Babe Ruth or Lou Gehrig cards they bought for $100 at a flea market only to discover they are reprint cards issued in the 1990s and roughed up to look old.  Reprint cards can easily be told apart from the originals based on the material they were printed on.  Any card printed on plastic like material is obviously from the modern era.  Most of the cards from this era show extreme wear, so if you have a card like this in great shape; chances are that it is not an original. 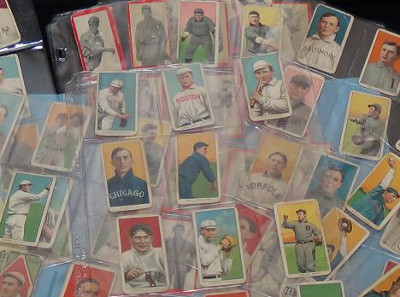 An example of a T206 and T210 baseball card collection sold to Dean.

Any card worth a lot of money will not be sold at a flea market for a low price.  Nowadays the general public knows old baseball cards can be extremely valuable, so amateur sellers tend to OVERPRICE baseball cards rather than the other way around.  Stories about the T206 Honus Wagner being found in safety deposit boxes and sold for hundreds of thousands of dollars make people think that finding any old baseball cards is like hitting gold.

However, the cards worth thousands of dollars are rare exceptions.  Most extremely valuable cards are superstars and in near perfect condition, as the cards of the common players in average condition are worth far less money.  Dean has seen many newspaper articles or TV interviews over the years that paint unrealistic values on these cards.  One example he likes to use is a self-proclaimed "expert" on the Antiques Road Show that overestimated the value of a collection by 10 times or more.  This made for good TV, but these misrepresentations confuse the people who are seriously trying to sell collections.

Despite their prestige, pre-war cards are hard to sell, even for Dean's Cards.  It is important to remember the old "Economics 101" Lesson about Supply and Demand.  The supply of the pre-war cards is low, which drives up the value.  But, because of the higher price of the pre-war cards, the demand is also fairly low, when compared to the newer cards.

That said, if you have Pre-War cards to sell, they could be worth good money.  You can trust Dean's Cards to offer top dollar, as we make the process as straight forward and simple as possible. You get our best offer up front so we don't waste your time with dickering or bargaining. Send us details about your collection through our collection information form, or contact our buying team with any questions or concerns.

For more information, check out our page 'Why Should I Sell to Dean's Cards?'